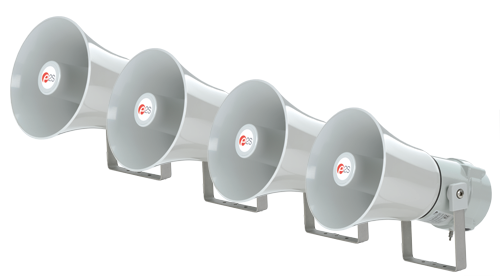 In February 2010, an earthquake with 8.8 magnitude occurred off the coast of Central Chile effecting large parts of central and southern Chile. The earthquake triggered a tsunami which hit many coastal areas including the City of Penco with a population of approximately 40,000.

As part of UNESCO’s and the European Commission Humanitarian Aid Department’s (ECHO) project to provide tsunami preparedness and risk reduction, a number of sirens and backup systems were installed to coastal areas to provide an early tsunami warning system.

The system was installed and designed by ATECMIN LTDA, an E2S distribution partner in Chile.  A131 4-horn alarms were distributed along the coast of Penco. Each siren consists of a control panel and battery backup. Communication to the A131 alarm system is via radio and can be initiated by the Hydrographic and Oceanographic Service of the Chilean Navy (SHOA) whenever they consider the population of Penco need to be warned of a possible tsunami.

The A131 wide area audible warning sirens have a high output of 131dB(A) @ 1 metre and can be installed with up to four alarm horns with sound coverage up to 300m.

The A131 has a battery back-up option which means it can deliver a safety warning even in the event of a power failure, for up to 30 days in standby and 30-minutes alarm assisting greatly in emergency situations such as natural disasters or in other wide area evacuation warning system situations.

For more information about the A131 Sirens, please follow the links below:

Join over 18,882 industry professionals and get our latest news sent directly to your inbox.