A visual signal is a luminous source within a coloured transparent enclosure and is used in many applications not least as reinforcement to an audible signal in the event of danger, warning or machine status / system process.

With the possible exception of status indicators, the purpose of the E2S visual signals range is to attract attention as compared with a luminaire or general purpose light which is intended to illuminate a given area and not necessarily attract attention. Therefore the effectiveness or the light intensity of a device as opposed to merely its capacity to illuminate is probably the important consideration. Different light sources may offer significantly different effective light intensity and ability to attract attention, particularly when flashing; however in contrast their ability to illuminate a given area may be fairly poor.

E2S provides information relating to the effectiveness of a visual signal based on actual measurements for each model within the E2S range. The information provided IS NOT based on rule of thumb assumptions and / or calculations alone. We therefore have confidence our measured light output values are meaningful and will better aid product selection.

There is a choice of luminous sources,

How do E2S measure the light output

A spectrometer is used for measuring the average effective luminous intensity of an entire beacon lens. This is then translated into an Effective Candela figure (cd).

In the case of a flashing beacon such as a xenon strobe the pulse duration as measured between the 10 % of peak amplitude for the leading and trailing edges of the pulse is measured. Light levels are collected during the pulse period, these are translated using the Blondel-Rey formula into an Effective Candela figure (cd). This is the intensity that would appear to an observer if the light were burning steadily.

The effective luminous intensity (Ieff), expressed in candela (cd), is calculated for each pulse measured using the following Blondel-Rey formula: 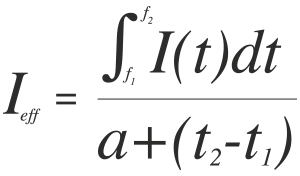 I(t) is the instantaneous value in candela (cd);

a = visual time constant where either 0.2 (nighttime) or 0.1 (daytime) constants are used in calculation.

t2 – t1 is the light pulse duration as measured between the 10 % of peak amplitude for the leading and trailing edges of the pulse.

When evaluating or comparing output data of more than one visual signalling device, it is probably worth considering how the data has been established.

Rules of thumb and calculations based on the energy of the flash tube within a xenon strobe beacon have customarily been used to give an indication of effectiveness. However when comparing outputs derived by calculations based on energy alone, to measured outputs with a spectrometer or similar, the output is often overstated in terms of effective candela (candle power) and especially in terms of peak candle power. This can all too often be misleading and unless two devices have been measured for output then their effectiveness in terms of candela output cannot be accurately compared.

E2S state two measures of effective light output for all xenon strobe beacons both of which have been carried out and subjected to, a fully assembled, product fitted with a clear lens, these are,

Effective Candela (cd) – Measured: also known as effective candle power, this is the measured intensity that would appear to an observer if / when the light was burning steadily. This data which should be used when comparing two different visual signalling devices.

Peak Candela (cd) – Measured: also known as peak candle power, this is the maximum intensity measured generated by a flashing device during its light pulse. – it is recommended the peak candela figure should not be used when comparing two different visual signals.

In the case of xenon strobe visual signals E2S state calculated figures based on the energy rating of the flash tube, this type of information has customarily been used within the visual signalling industry to give a rule of thumb indication and is subject to many anomalies that give rise to inaccurate and overstated output figures. This may be due to differences in size and efficiency of lens, physical shape of the strobe lamp and arrangement relative to the lens and the efficiency of the strobe flash tube itself. Other factors, not least lens color influence light output and is dealt with later.

Below is a description of the calculated light output figures included for information only. The difference between these figures and actual measured outputs is demonstrated later.

An Example of Differences between Measured and Calculated Effective Candela data.

The visual signals below are all 5 Joule energy rated xenon strobe beacons. They are physically different both in terms of enclosure and lens arrangement. Table 2, demonstrates the anomalies and assumptions which lead to inaccuracies if the effective candela is calculated and / or a rule of thumb is applied as opposed to being measured

The formula below may be used to convert effective candela into viewing distance or range, based on normal visibility in day time conditions.


How much does lens colour effect the intensity of a light source?

The effect of lens colour on the intensity of the light source within an industrial environment may be expressed as follows:

Please note all the above information is for guidance only and does NOT guarantee performance or coverage.

Siting of a visual signalling device

Omni-directional light dispersion should be the first consideration when installing a beacon, ensuring free air movement around the beacon enclosure and therefore preventing the build up of heat from the light source emitted during the normal operation of the beacon. Vibration should be avoided particularly with filament bulb beacons. Light travels in straight lines, the beacon will be far more effective if positioned in the line of sight rather than relying on reflections. Where applicable audible signals should always be the primary warning with the beacon used as a secondary indication or status.

These are the colours needed for lights and buttons to conform to the machine directive.

Choose your application below to view suitable visual signals:

Join over 18,283 industry professionals and get our latest news sent directly to your inbox.